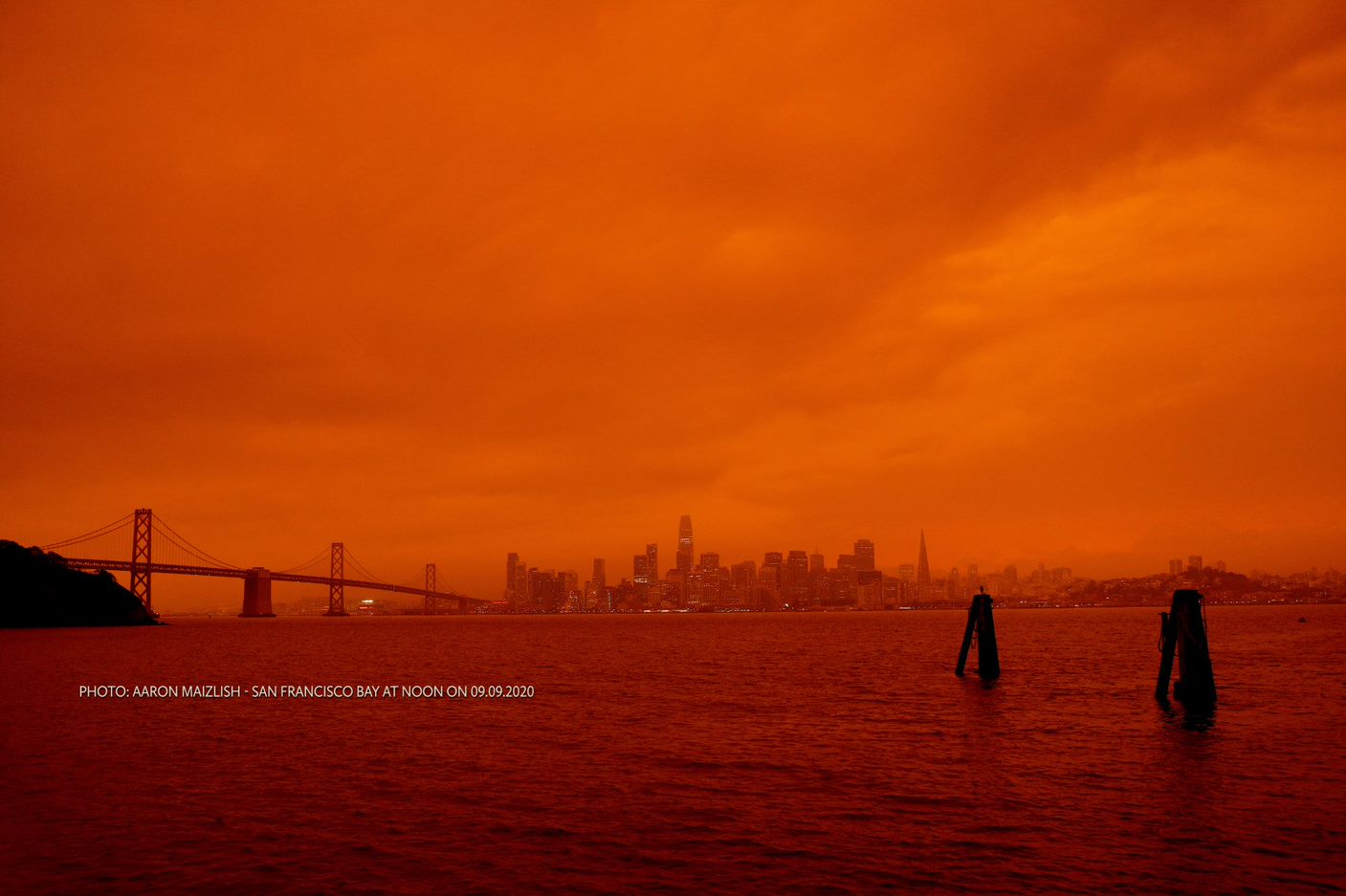 When large megafires burn at high severity in the Sierra Nevada, they produce massive plumes of smoke that spread across California with disastrous effects.

Air pollution from the 2020 wildfires was worst on record

In August and September 2020, wildfire ash from fires across the state, including the Sierra Nevada, blanketed major metropolitan areas like San Francisco. The city, which typically enjoys good air quality, experienced the fourth worst air quality in the world.

Across the state, air pollution from the 2020 wildfires was the worst on record. Many places in California experienced air rated “very unhealthy” for the first time including the counties of Tulare, Monterey, San Luis Obispo, Santa Cruz, Siskiyou, and Plumas.

Following the onset of smoky conditions, one bay area hospital (Stanford University Hospital) noted an alarming increase in pollution-related hospitalizations. After two weeks they had admitted an additional 500 patients, a 12% increase. After three, patients admitted for a range of conditions with known relationships to fine particulate matter (PM 2.5) pollution, a large constituent of wildfire smoke, like asthma (17%), heart disease (14%), and kidney issues (18%) showed significant increases. Doctors also observed a 43% increase in strokes and other cerebrovascular hospitalizations that can be caused by inflammation related to exposure to air pollution.

Statewide, Stanford University researchers estimated the expected death toll from wildfire smoke based on peer-reviewed studies of the impacts of PM 2.5 exposure and pollution levels from EPA monitors. Their conservative estimate found that wildfire smoke would result in 3,000 excess deaths in the month following these smoke events.

Although 2020 was a particularly grim year for wildfire smoke health impacts, it is not an isolated event. A recent study published in the Proceedings of the National Academy of Sciences compared satellite images of wildfire smoke plumes to local air quality monitoring stations. What they found is that in California, and across the American West, smoke from large wildfires threatens to erode health gains made through Clean Air Act policies that have drastically reduced harmful pollution from sources like tailpipes, power plants, and industrial facilities.

Compounding an already difficult situation, smoke from record-shattering wildfires in the Sierra Nevada region affected people across California during a particularly challenging time—the 2020 fire season overlapped with the COVID-19 pandemic. As a result, many Californians found themself unable to safely go outside when options for indoor activities were also extremely limited. This was equally true in the Sierra Nevada itself where millions travel each summer to, as the saying goes, breathe the fresh mountain air. Not in 2020.

Instead, much of the Sierra Nevada was also shut down due to wildfire smoke impacts. Yosemite National Park closed. Kings Canyon National Park closed as well. Eastern Sierra towns with recreation-based economies, like Mammoth Lakes and Bishop, experienced “beyond index” air quality readings of over 600, exceeding the 0-500 scale.

Historically, wildfire played an important role in maintaining the ecological health of forests across the Sierra Nevada Region, and it’s going to play a role in future forest management activities.

Where there is fire, there will be smoke, but we have a choice in how and when that smoke occurs. Both prescribed fires and managed wildland fires result in significantly less severe smoke impacts than megafires.

We’re funding this type of work through the Sierra Nevada Watershed Improvement Program, and after watching clear California skies turn orange from smoke in 2020, we’re more certain than ever that it’s worth the investment.