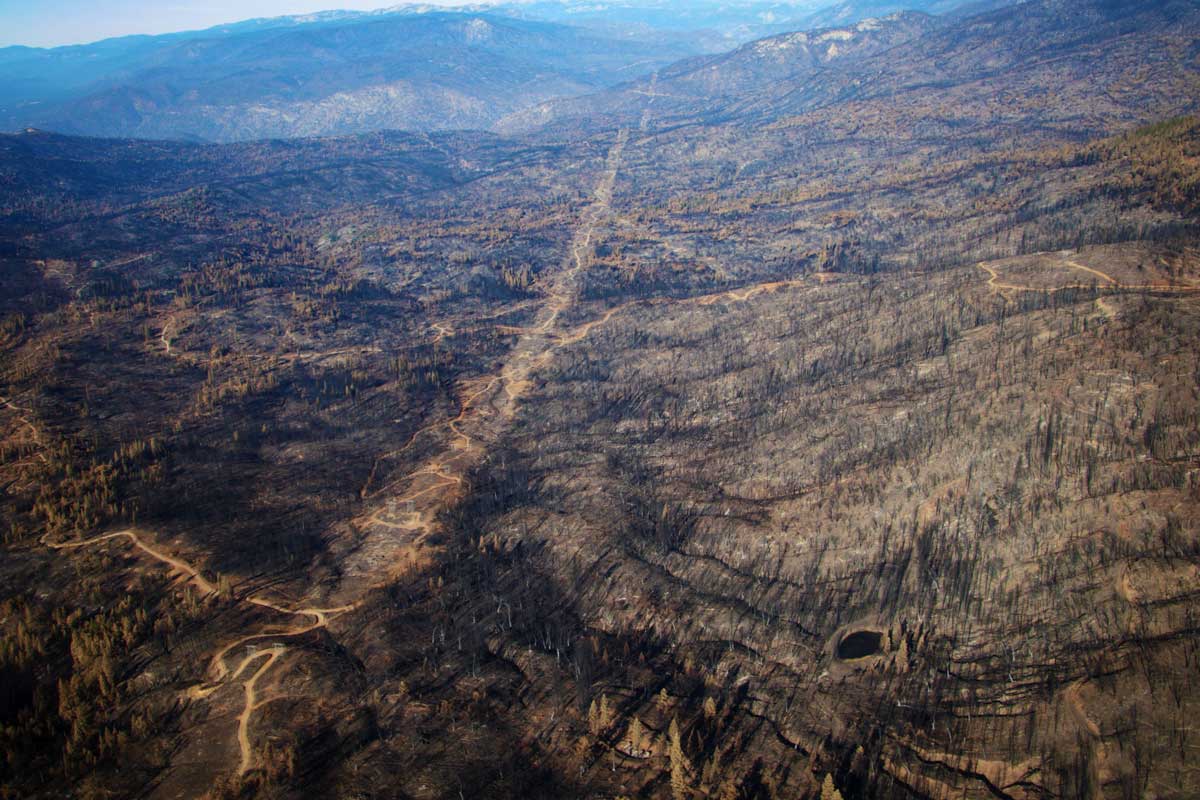 Nearly half of the 2020 Creek Fire, the largest in the modern history of the Sierra Nevada, burned at high severity. The amount, size, and arrangement of high-severity fire in 2020 appears to be unlike anything the region has experienced in the past.

A record-breaking year in 3 fires

Almost one million acres burned in the Sierra Nevada in 2020, which is more than double the previous record set in 2018. Although the amount of fire grabs headlines, more concerning is the type and distribution of these fires. The Creek, North Complex, and SQF fires were three of the five largest Sierra Nevada fires in the last 100 years, and each fire left behind large areas where all, or nearly all, vegetation was killed.

Historically, hundreds of thousands of acres burned in the Sierra Nevada in a normal year, but they were spread across the landscape in many smaller fires, not concentrated in a few megafires like in 2020.

The wrong kind of high-severity fire

The scientific literature describing fire regimes in the Sierra Nevada’s mixed conifer forests refers to high-severity burn patches, relatively small areas within a mosaic of fire effects where all, or nearly all, vegetation is killed.

This vocabulary is inadequate to describe what transpired in 2020. Instead, the intensity with which these large 2020 fires burned created high-severity burn landscapes. The amount, size, and arrangement of high-severity fire in the region appears to be unlike anything the region has experienced in the past.

The 2020 North Complex Fire, near Lake Oroville, burned over 170,000 acres at high severity. This area is bigger than downtown L.A. and neighboring cities.

The North Complex Fire’s high-severity burn landscape is unlike anything the Sierra Nevada has experienced. This one fire’s high-severity burn area is four times larger than the average area burned at high severity from all Sierra Nevada fires during an entire year. (Note: the average area burned is based on a healthy, historical fire regime that predated European settlement).

The North Complex Fire was one of three megafires in the Sierra Nevada in 2020. The Creek and SQF Complex Fires also burned large landscapes at high-severity in mixed conifer forests.

These megafires affected communities up and down the Sierra Nevada. Sixteen lives were lost, and more than 3,500 homes and businesses were destroyed, including most of the town of Berry Creek.

The size and severity of these megafires also caused:

The SQF Complex Fire killed hundreds, if not thousands, of old-growth Giant Sequoias that had survived countless smaller, less severe fires. The tragic loss of these ancient trees highlights how fires of this type degrade, rather than renew, Sierra Nevada forests along with the habitat, carbon storage, and water security benefits they provide.

The destruction of the 2020 fire season was neither uniform nor completely random. In places where public and private partners had already completed work to improve forest health, fires appeared to burn in less dangerous and destructive ways. Read more about our work through the Sierra Nevada Watershed Improvement Program in our 2020 Annual Report.