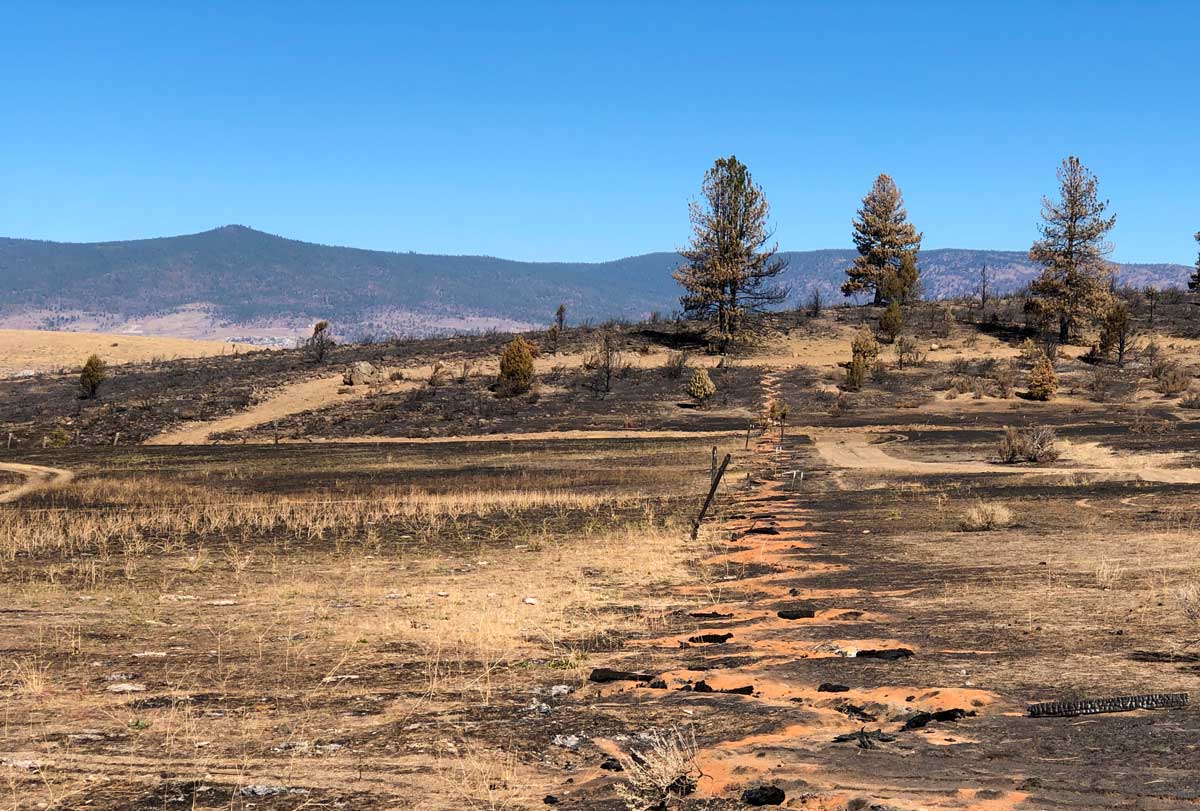 The Sheep Fire ignited on August 17, 2020 in the mountains above Susanville, California. Before it was contained three weeks later, it would burn to the edge of the small Lassen County city, char 29,570 acres, and destroy nine residences. A lot was lost, including on working lands like the over 150-year-old Hulsman Ranch, where extensive timberlands, a heritage barn, a season’s worth of hay, and miles of split-rail fencing (some of which is depicted in the image above) were all consumed in the fire. And it could have been worse.

The destruction of the 2020 fire season was neither uniform nor completely random. In many places where public and private partners had already completed work to improve forest health, fires appeared to burn in less dangerous and destructive ways.

Part of the Sheep Fire burn area includes a rural neighborhood of scattered homes along Old Archery and Childrens roads outside Susanville. There the Sierra Nevada Conservancy had joined forces with the Lassen Fire Safe Council to improve forest health and fire resilience. Over the previous 12 years, the SNC provided the Lassen Fire Safe Council three grants to thin a total of 1,480 acres of overgrown forests around these homes and into the nearby forestlands. These treatments were supplemented by even more work funded by state and local partners.

The beneficial impact of these forest health treatments was clearly visible to SNC and Lassen Fire Safe Council staff that visited shortly after the fire. As they entered treated areas near the populated foothills, dense thickets of uniformly blackened trunks and burnt branches, many burnt so severely that no leaves or needles remained, slowly gave way to a more open landscape populated with half-burnt, and eventually, live green trees. On the ground, bare scorched soils gave way to singed grasses and fallen pine needles. And as they neared the populated areas, evidence of fire suppression activities—fire lines and backburns to protect structures—proliferated.

Asked about the role of preventative forest health treatments in protecting homes during the Sheep Fire, Managing Director Tom Esgate is convinced the work made a difference.

“The Lassen Fire Safe Council works in and around the wildland urban interface to protect communities. That means creating defensible space around structures and reducing hazardous fuel loads on the surrounding landscape in order to provide a safer environment for suppression resources to operate and moderate fire behavior before it arrives at the communities’ doorsteps,” said Esgate. “Talking with incident commanders during the fire and looking at the post-fire landscape, I’m confident calling these projects a success.”

Through the Sierra Nevada Watershed Improvement Program (WIP), we quickly and effectively put money on the ground to restore resilience to the forested landscapes and communities in the Sierra Nevada. Read more about our work through the WIP in our 2020 Annual Report.